Caching can be considered an important aspect in tuning database system performance.

While this post is mainly focused on postgres, it can be easily compared and understood with other database systems.

What is a cache and why do we need one

Different computer components operate at different speeds. We humans are extremely poor at understanding numbers at the scale that computers do.

Looking at the table below (taken from here) we can have an idea.

The numbers are approximated at human scale.

In a database system, we are mainly concerned about disk I/O.

Magnetic disks are poor for random I/O when compared to their newer counterparts the SSDs.

Most OLTP workloads are random I/O, hence the fetch from the disk can be very slow.

To overcome this, postgres caches data in RAM which can greatly improve performance. Even in the case of SSDs,RAM is much faster.

This general idea of a cache is common to almost all database systems.

Before we move forward, it is necessary to understand certain terminologies.

I suggest to start reading with postgres physical storage.

Once you are done with that, inter db is an another one which goes in a little more depth. In particular, the section about heap tuples.

The official documentation for this is also available, but it is a little hard to get your head around.

Regardless of the content, postgres has a storage abstraction called a page(8KB in size). The image below gives a rough idea. 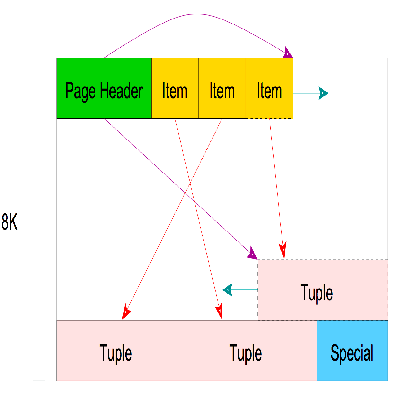 This abstraction is what we will be dealing with in the rest of this post.

We will explore how table data and indexes are cached in detail further in this post.

Postgres has several configuration parameters and understanding what they mean is really important.

For caching, the most important configuration is the shared_buffers.

Internally in the postgres source code, this is known as the NBuffers, and this where all of the shared data sits in the memory.

The mechanisms involved in putting data into a cache and evicting from them is controlled by a clock sweep algorithm.

It is built to handle OLTP workloads, so that almost all of the traffic are dealt with in memory.

Let’s talk about each action in detail.

Postgres is a process based system, i.e each connection has a native OS process of its own which is spawned from the postgres root process(previously called postmaster).

When a process requests for a page in the LRU cache (this is done whenever that page is accessed via a typical SQL query), it requests for a buffer allocation.

If the block is already in cache, it gets pinned and then returned. The process of pinning is a way to increase the usage count discussed below. A page is said to be unpinned when the usage count is zero.

Only if there are no buffers/slots free for a page, then it goes for buffer eviction.

Deciding which pages should be evicted from memory and written to disk is a classic computer science problem.

A plain LRU(Least Recently Used) algorithm does not work well in reality since it has no memory of the previous run.

Regardless of the nitty-gritty details, the cache algorithm by itself requires almost no tweaking and is much smarter than what people would usually think.

We were talking about select queries till now, what happens to DML queries?

This is where the notion of dirty pages come in, i.e a page has been modified and has not been written to disk.

Here is some more homework/study to be done, before we proceed, in particular about WAL and checkpoints.

WAL is a redo log that basically keeps track of whatever that is happening to the system. This is done by logging all changes separately to a WAL Log. Checkpointer is a process which writes the so called dirty pages to disk periodically and controlled by a time setting. It does so, because when the database crashes it does not need to replay everything from scratch.

This is the most common way of pages getting evicted from memory, the LRU eviction almost never happens in a typical scenario.

Explain is a wonderful way to understand what is happening under the hoods. It can even tell how much data blocks came from disk and how much came from shared_buffers i.e memory.

A query plan below gives an example,

Shared read, means it comes from the disk and it was not cached. If the query is run again, and if the cache configuration is correct (we will discuss about it below), it will show up as shared hit.

It is very convenient this way to learn about how much is cached from a query perspective rather than fiddling with the internals of the OS/Postgres.

The case for sequential scans

A sequential scan i.e when there is no index and postgres has to fetch all the data from disk are a problem area for a cache like this.

Since a single seq scan can wipe all of the data from a cache, it is handled differently.

Instead of using a normal LRU/clock sweep algorithm, it uses a series of buffers of total 256 K.B in size. The below plan shows how it is handled.

Executing the above query again.

We can see that exactly 32 blocks have moved into memory i.e 32 * 8 = 256 KB. This is explained in the src/backend/storage/buffer/README

Postgres as a cross platform database, relies heavily on the operating system for its caching.

The shared_buffers is actually duplicating what the OS does.A typical picture of how the data flows through postgres is given below. 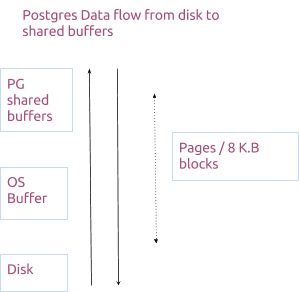 This is confusing at first, since caching is managed by both the OS and postgres as well, but there are reasons to this.

Talking about operating system cache requires another post of its own, but there are many resources on the net which can leveraged.

Keep in mind that the OS caches data for the same reason we saw above, i.e why do we need a cache ?

We can classify the I/O as two types, i.e reads and writes. To put it even more simpler, data flows from disk to memory for reads and flows from memory to disk for writes.

For reads, when you consider the flow diagram above, the data flows from disk to OS cache and then to shared_buffers. We have already discussed how the pages will get pinned on to the shared_buffers until they get dirty/unpinned.

Sometimes, both the OS cache and shared_buffers can hold the same pages. This may lead for space wastage, but remember the OS cache is using a simple LRU and not a database optimized clock sweep. Once the pages take a hit on shared_buffers, the reads never reach the OS cache, and if there are any duplicates, they get removed easily.

In reality, there are not much pages which gets stacked on both the memory areas.

This is one of the reasons why it is advised to size the shared_buffers carefully. Using hard and fast rules such as giving it the lion’s share of the memory or giving it too little is going to hurt performance.

We will discuss more on optimization below.

Writes flow from memory to disk. This is where the concept of dirty pages come in.

Once a page is marked dirty, it gets flushed to the OS cache which then writes to disk. This is where the OS has more freedom to schedule I/O based on the incoming traffic.

As with many database systems, there is no silver bullet configuration which will just work. PostgreSQL ships with a basic configuration tuned for wide compatibility rather than performance.

It is the responsibility of the database administrator/developer to tune the configuration according to the application/workload. However, the folks at postgres have a good documentation of where to start

Once the default/startup configuration is set. We can do load/performance testing to see how it is holding up.

Keep in mind that the initial configuration is also tuned for availability rather than performance, it is better to always experiment and arrive at a config that is more suitable for the workload under consideration.

Optimize as you go

With postgres, there are two ways you can measure.

While there is no general consensus on which platform postgres works best, I am assuming that you are using something in the linux family of operating systems. But the idea is kind of similar.

To start with, there is a tool called Io top which can measure disk I/O. Similar to top, this can come in handy when measuring disk I/O. Just run the command iotop to measure writes/reads.

This can give useful insights into how postgres is behaving under load i.e how much is hitting the disk and how much is from RAM which can be arrived based on the load being generated.

It is always better to monitor something directly from postgres,rather than going through the OS route.

Typically we would do OS level monitoring if we believe that there is something wrong with postgres itself, but this is rarely the case.

With postgres, there are several tools at our disposal for measuring performance with respect to memory.

Gives lot of details on how much time queries took and their average.

The disadvantage with this approach is it takes some amount of performance, so it is not generally recommended in production systems.

There are several more, but I have listed the most popular and easy to use ones for understanding postgres cache and also in general. Armed with these tools, there are no more excuses for a slow database because of memory problems